3rd Party Decentraland Plugins – The Next Evolution of Building?

It is now only a matter of days until the new Decentraland Builder (drag and drop editor) is released, and the official competition to win thousands of MANA begins.

The Builder tool is a great first step in reducing the barriers to being able to create a fantastic looking scene, however, initially it will only be capable of building and designing static scenes. If you want anything more advanced, you need to know how to code.

It is understandable that the Decentraland programmers first focus on getting the fundamentals of the Builder tool working efficiently and correctly. But if you add to that the task of designing and creating a brand new library of elements with which you can design a scene, this is a huge task, and certainly won’t happen overnight.

Static scenes will be visually appealing, but there is only so long that you can appreciate even one of Van Gogh’s finest paintings before boredom sets in.

Introducing animated scenes will likely be the next step for the Builder tool, but this will still leave more advanced functions even further down the roadmap.

The Decentraland developers can only do so much.

Could this leave the door wide open for independent and entreprenurial coders/developers to get a step ahead and monetize their skills, whilst at the same time provide some real value to business growth in Decentraland, by creating 3rd party ‘function plugins’?

Whether plugins were sold as a one off, chargeable by monthly subscription or take a small % of each transaction, the opportunities are endless. All seem reasonable if they facilitate the growth and earning potential of LAND owners.

Most Decentraland entrepreneurs and investors will likely waste no time in trying to generate an income, but without an easy way to e.g. implement payments, then this will only serve to slow down and stifle creativity. Functionality is key, and could be delivered in many forms, one of which could be a simple plugin, not too dissimilar from WordPress or Google Chrome plugins.

Here are some Decentraland plugin ideas. Feel free to add more in the comments below:

Shop Plugin – A click and buy function which allows LAND owners to attach the plugin to their scene and instantly sell items within it. We have already begun to see the first attempts at this (see vending machine below) but unfortunately a certain level of coding ability is still required.

Made this prototype early in December inside a literal sandbox for testing different methods of displaying and purchasing NFTs. A vending machine is convenient but being able to inspect items up close is better for 3D assets like weapons in #chainbreakers. #webvr @projectopensea pic.twitter.com/s9zki4JbKq

Permission Plugin – Running an exclusive event in Decentraland? This plugin would allow LAND owners to only permit certain people to enter their LAND. It could go one step further and include a pay-to-enter facility, which would be great for event ticket sales or music gigs in Festival Land.

Agreement Plugin – Should a LAND owner only wish to allow certain behaviour or actions on their LAND, then all users entering must first sign an agreement on the blockchain to say they understand and adhere to these rules. There are many other circumstances where this could be used.

Score/Leaderboard Plugin – Would be a great plugin for those hosting games and competitions on their LAND.

Staff Clock In Plugin – If your business model requires someone to always be present in your LAND, you may need to consider hiring. This plugin would track working hours and allow the employer to pay accordingly.

Auction Plugin – Imagine if you could host live auctions on your LAND? There has already been proven excitement and demand for this after the successful Decentraland LAND auctions.

Mini-Game Plugin – If dragging and dropping a playable game of e.g. chess, battleships or poker into your scene were an option, this would provide some REAL value. It’s easy to imagine how holding a weekly private poker game on your LAND for you and your friends would certainly add value to the experience as a whole, and encourage returning visitors.

It is still very early days for the Builder tool, and it still isn’t even certain that developers will be able to add 3rd party plugins. The hope is that they will, as this would encourage creativity and innovation, as well as save the Decentraland developers a huge task.

Will developers choose to make themselves a small fortune by eliminating the coding aspect of building for the masses, whilst at the same time creating something of real value for the entrepreneurs who are eagerly preparing for launch day? Only time, and limitations, will tell. 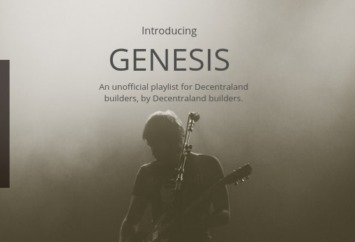 Add YOUR Songs To The Genesis Decentraland Builders Playlist Here